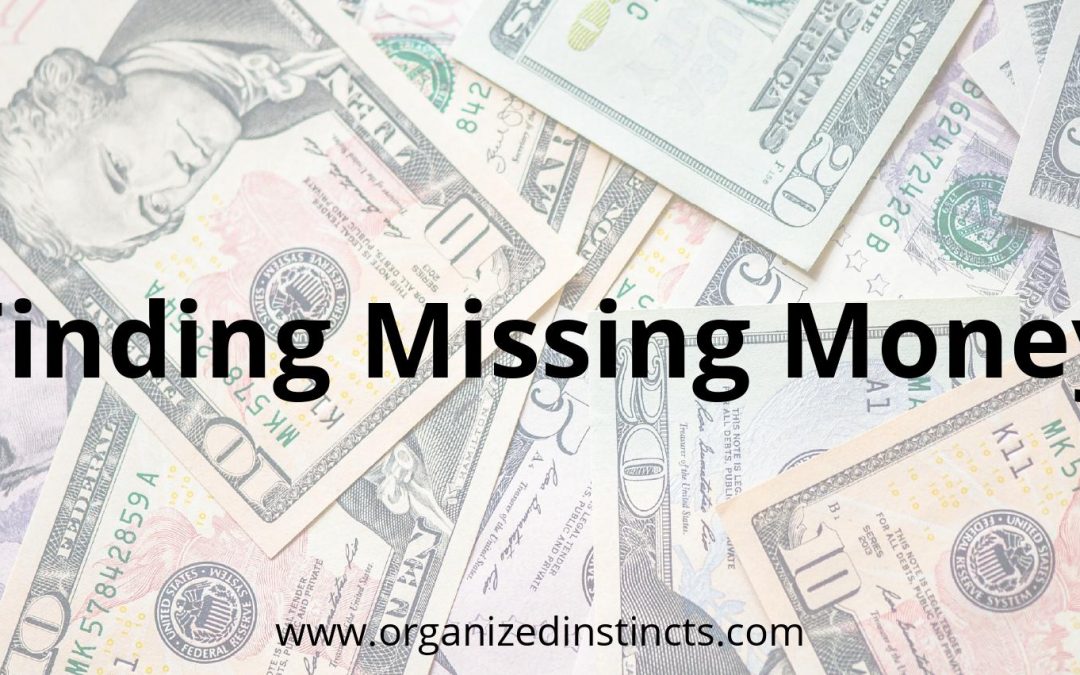 Who doesn’t like finding missing money? If you’ve been around the block a few times, chances are you might have a sum of money trying to find you. Perhaps you moved away, started a new job, switched banks, or have forgetful family members. It might behoove you to have a look online to see if you or a loved one might find missing money.

How does money go missing?

It might be somewhat of a mystery why—or even how—money goes missing. How does money go “missing” anyway? Perhaps you’ve switched bank brands and accidentally left a $100 balance behind in a long forgotten savings account. Perhaps you misplaced a refund check, from your dentist office, that you’ve forgotten to cash. Perhaps a long lost relative or friend left behind an inheritance to you, but failed to include your pertinent contact information in their estate plan. As a rule, if you have unclaimed money after five years, the party holding the funds turns it over to the state. After such a long time, folks have either forgotten about it or don’t know they’re owed the money.

No matter the state in which you live, you can check an online multi-state register called MissingMoney.com to find out if you have any missing money anywhere you’ve lived in the past. You’ll also want to check the revenue department or treasury department of any states you’ve previously resided in. For the state of Georgia, where Organized Instincts is located, you can find information at Georgia.gov.

Even if you go online and find money that’s owed you, there is often a long process that must be completed before the funds can be released. Likely photocopies of your license and proof of residency will be needed in order to prove your identity. You might need to prove a name change with a marriage certificate or address change with a piece of mail such as an old bill. These documents will need to be collected and submitted before missing funds can be claimed.

How to Check the Lost and Found?

You’ll want to check both your married and maiden name in all the states you’ve lived in. If you have elderly family members with memory issues, be sure to check their names as well, as it’s possible they’ve misplaced checks, such as tax refunds, that have never been cashed.

If you’re a disorganized person and are prone to losing paper checks, this is a good thing for you to check on yourself as well. You’ll also want to look into any of the 401(k)/ 403(b) accounts from any of your former jobs. You, as the employee, need to roll them over yourself; it is not an automatic process, which is why these funds are easily left behind. Small balance accounts are most likely to be forgotten, and subsequently lost as time passes on.

Finding Other Sources of Lost Money

Sometimes we’re gifted with gift cards we don’t want or will never use. If that’s the case, you can sell them online. According to this article on usnews.com, there are several websites available that will buy back your unwanted gift cards, and you might even be able to exchange your card(s) on these sites for the same amount with other retailers that you will be sure to enjoy.

You can donate unwanted gift cards to a worthy cause, such as the St. Jude’s Children’s Research Hospital or a website such as CharityChoice which would go toward helping people who might be experiencing financial difficulties.

Another place to find “lost money” could be your own home. How much loose change do you have rolling around in your junk drawers, nightstands, maybe even your couch? If you have any change around the house, cash them in as there’s really very little need to carry coins these days. Maybe you don’t have much change to cash in, but perhaps you have enough for a Venti Starbucks latte in the end, and that is a reward all to itself.

You might also have a few bills tucked away in an old jacket or forgotten in an old purse or wallet. Be sure to check all your pockets and compartments before donating anything you own. There might be something hidden in your secret hiding spot.

If you have missing money, you don’t want to miss out on claiming it. There’s no reason not to, and you’ll only be better off for doing so. Have a look and maybe you’ll get yourself a little extra spending money.

At Organized Instincts, our seasoned team of daily money managers can help you streamline your financial tasks and routines. Schedule a free consultation today and give yourself the freedom to joyfully and abundantly live life.